It is over. It was one of my best vacations ever. We had a chance to see a lot of beautiful spots, especially in Venice and Gratz and had great snowboarding times on Val Gardena area slopes.

As I said in previous post, this time we did plan our trip more carefully. Without long night driving and staying in hotels for night to have a rest. We went out of the Kiev early morning (about 3.00) and went to west Ukraine border to small town - Astey where we crossed the border to Hungary. This time we are 2 cars team. Connected with radio stations, we feel like a professional rally riders for a long test drive trip :).

Dmytro (the manager of our trip) booked very nice hotel All-4 U in center Budapest. Living in center has pros and cons, of cause.. It is good that you could walk to main city POI’s, but it was very (very!) hard to find hotel and find a parking place for car. Center of Budapest is in heavy maintenance now, so our GPS were guide us through streets that are closed for traffic now. We finally found hotel but it was located in very small street, with no free parking places so we did several circles, to finally hit the entrance and underground parking.

So, at the morning we had a quick breakfast and went to Venice, Italy. Nothing more as so good as driving by Euro highways. It is easy and safe and fast. Our path to Italy were made through Slovenia. Slovenia is very beautiful country and we very much enjoyed the ride. Near the 20.00 we came to hotel Alteri near Venice. We had a quick shower and preparation, got a bus tickets and went to city. Since we were really hungry, first place to visit was some restaurant to get some food. The owner of hotel recommended us some place and we went there. It was a quite small place. Food and vine were just perfect, very tasty. I was a little nervous about the price, but as I glanced to menu I was happy to see that prices are not overhigh. It is even lower that some expensive restaurants in center of Kiev.. but could you compare Kiev and Venice, with number of tourists, attractions? No way..

Venice is town on water. No transport, no cars, nothing. Only walking and using gondolas to go by chanells. Since we came on night, not a lot of tourists were in town that time. Some times it really created illusion that we are alone there! So quite, so small streets with small bridges.. so magical! If you are not familiar much with Venice you really think it is like maze. We lost several times but it was really fun. Andrey, the guy who held the map and was showing directions, was doing a great job to save us, but is was like that: “Now, let’s turn right, pass the bridge.. turn left and right again and bla-bla”, but after 10 minutes we were on same place we started with :). Fanstastic. 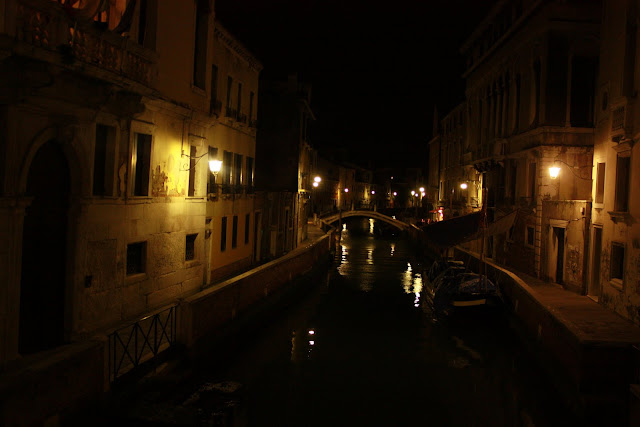 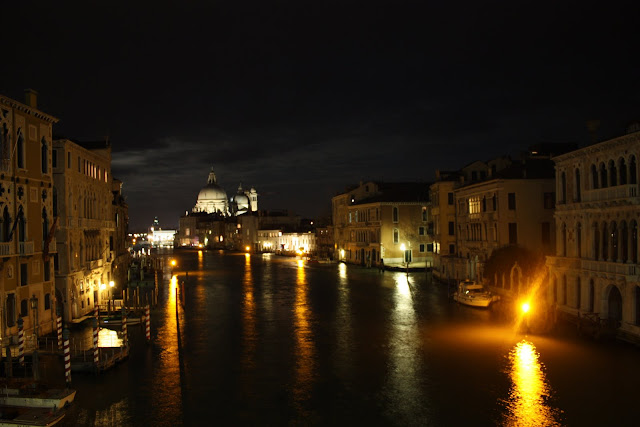 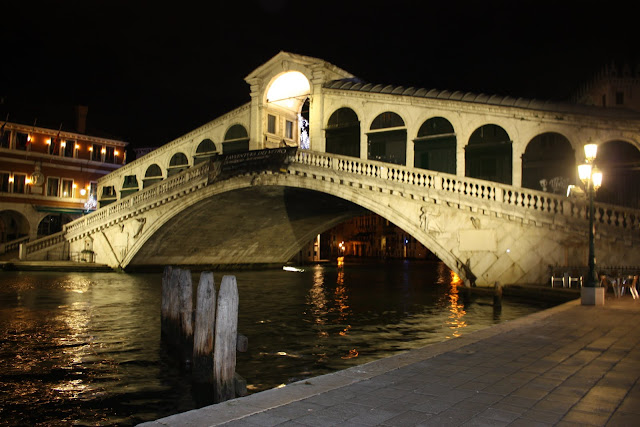 Next morning we had just a several hours to have a walk, so we were hurry to Venice again. At morning it looks really different. You can see much more details of cause (like, how all those building are really old.. or color of water in channels), but now it is overcrowded with tourists and souvenirs dealers. So the magic just gone :). But still a lot of shops and churches are opened, so you might have a chance to visit those.

Sashka near one of the channels 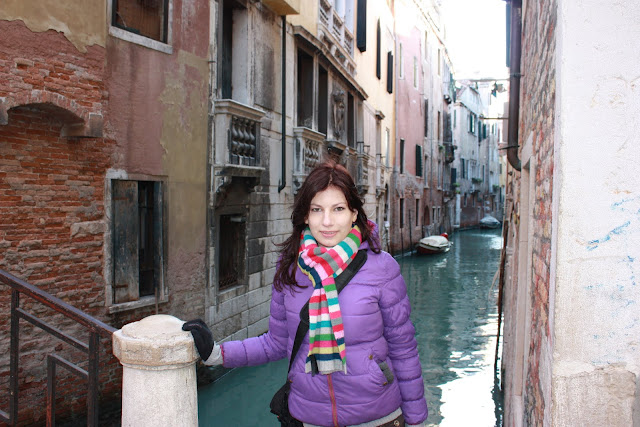 Together on San Marko 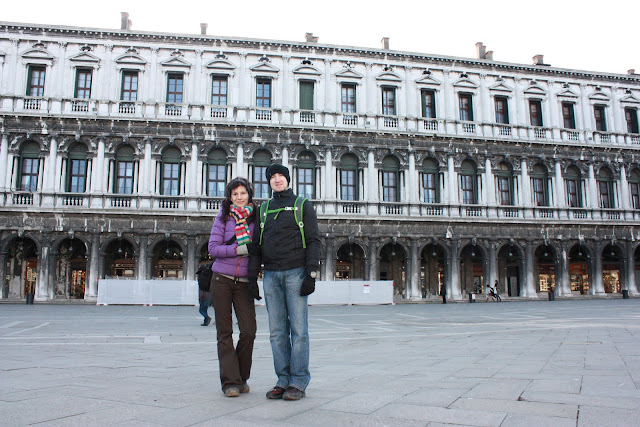 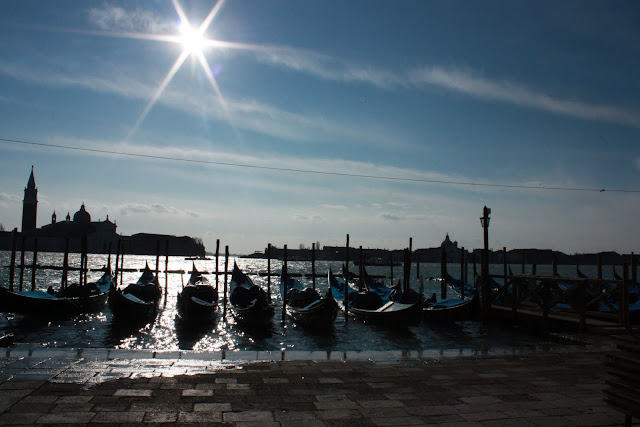 The weather were fine, but wind were quite cold. Late January is probably not the best time to visit Venice, but anyway I had a lot of pleasure to be in this legend place.

We packed our bags and went to target point of our journey, St. Christina. We were driving by highway, with a very sunny weather behind the car glass, seeing a lot of vineyards. Outside view was so warm that it was to difficult to imagine that somewhere is cold and snow covered peaks of mountains.

We came to St. Christina at evening, it was -4C and we climb to 1650m over sea level. It was dark already so we could not see mountains, but the air was so fresh and so nice that it could be only in Alps. We were exited about next 6 days! Val Gardena is huge and you might have everyday snowboarding in different places. So, it was a good idea to take good rest before exploring the mountains.

Val Gardena meet our expectations for sure! I’ve never seen so much exceptional view as from Seceda or Marmolada tops! Really-really beautiful landscapes. The killer feature of Val Gardena area is Sellaronda. Sellaronda is a circuit around Sella mountains massif.. Big number of slopes and lifts that makes it possible to feel all beauty of Dolomites. You can do the circuit in 2 directions, green one and orange one. They are mostly equal.. orange just contains a bit more red and black (more complex) slopes. Green one can be used by everyone, even if you are not so confident in skies or snowboard. It took about 3-4 hours to complete the circle. 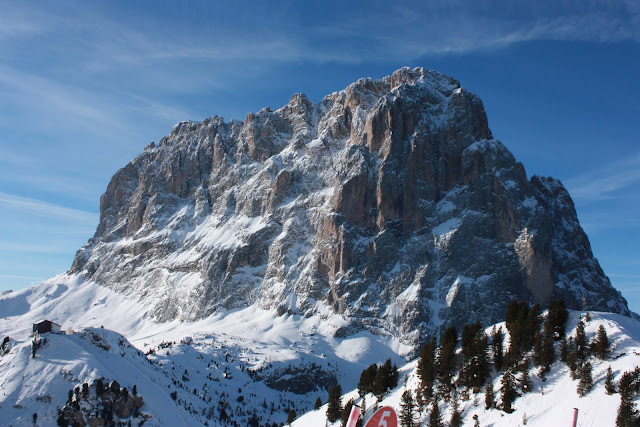 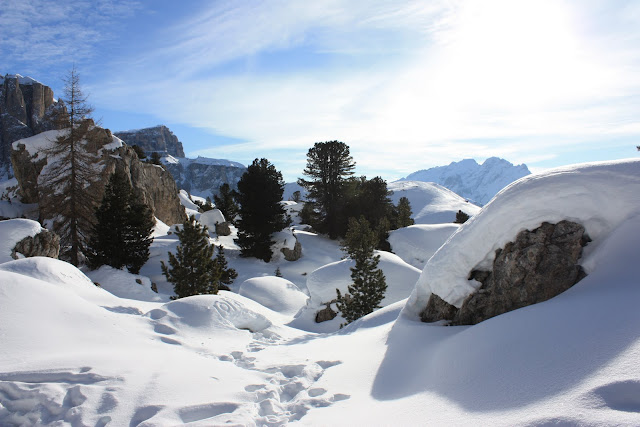 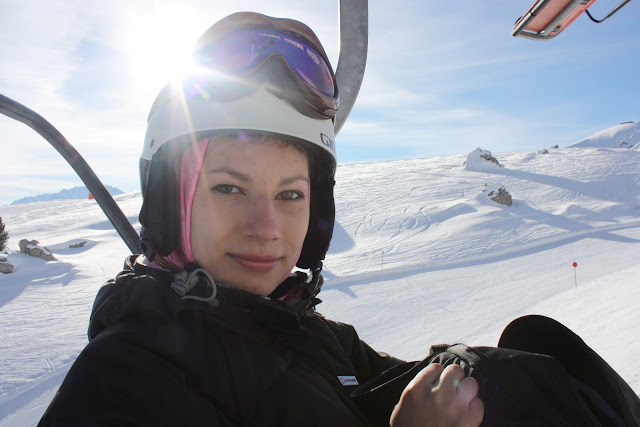 Me going down the slope 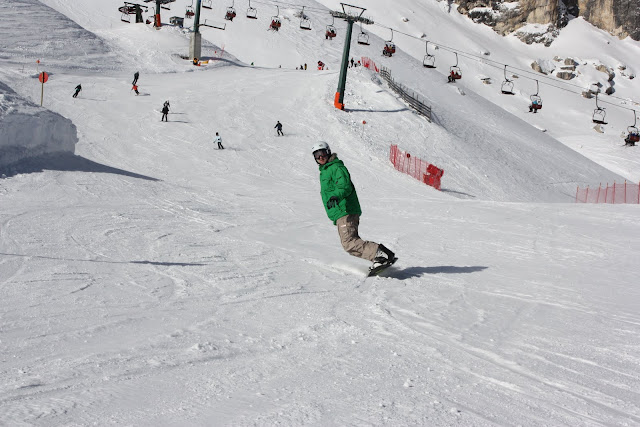 The biggest disadvantage of Val Gardena - it is overcroweded. Despite of huge area, you typically will be in long waiting lines for lifts on a popular slopes (especially ones that are on green or orange route). Besides of that just before our period of stay it was a quite warm weather there, without out big snowfalls, made slopes very hard and icy.

Marmolada is highest point of resort. According to wikipedia it is even seen from Venice on clear day. We dedicated one day for trip to Marmolada. It took almost 6 hours to me and Sasha to make possible to get on top and back to St. Christina. Even it took a lot of time to get where and spent a time in long waiting lines, as soon as you take a view from top you immediately forget about all bad things! 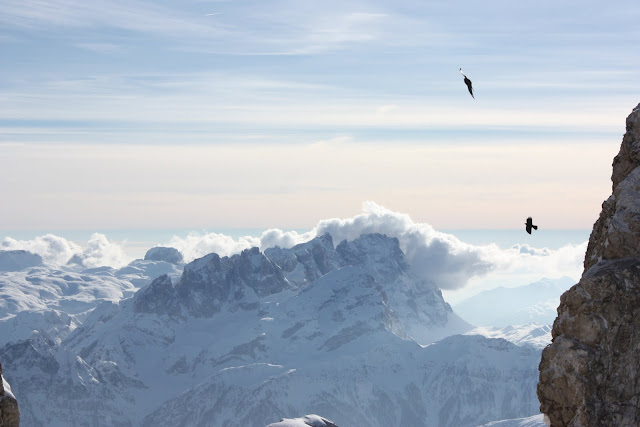 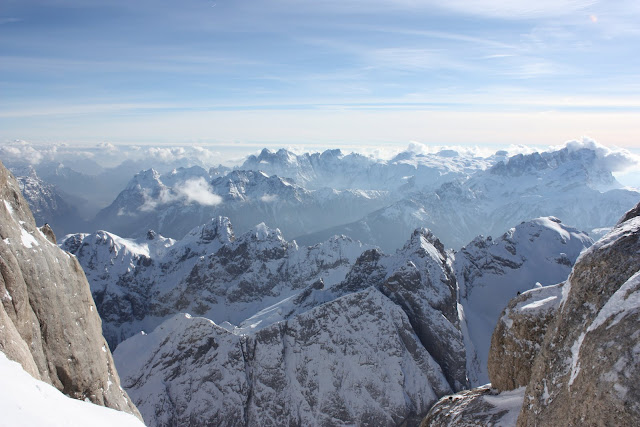 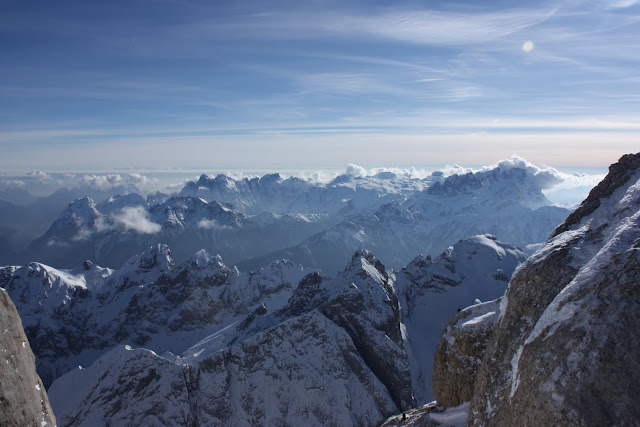 And I really-really much enjoyed the run from Marmolada back to valley. That was fantastic.

We’ve spend one evening in Ortizei looking for a fun public places, but have found nothing.. except one small bar where ski-instructors were getting drunk after hard work days :). Despite of Ischgl Apre-ski is not so popular in Italy, so after skiing we usually went home, preparing food and did our small parties.

6 days of snowboarding went very fast. Originally I planned to read some books and small coding stuff, but in evenings I was so tired that after a good dinner, usually with grappa or other alcohol, all I could do is only crawl into bedroom direction :). Our snowboarding times getting over, but way back-home with visits of Gratz and Lviv was waiting for us. Moreover, I’ve lost my camera in Budapest hotel, so we had to be there to take it back :).

Gratz is quite big city in Austia. Since we had not a lot of time, we visited only two Gratz’s spots, as Grazer Schloßberg and Kunsthaus. Schloßberg is a castle on mountain, you can get there either by foot or take a lift. From the mountain you might have very nice Gratz views. 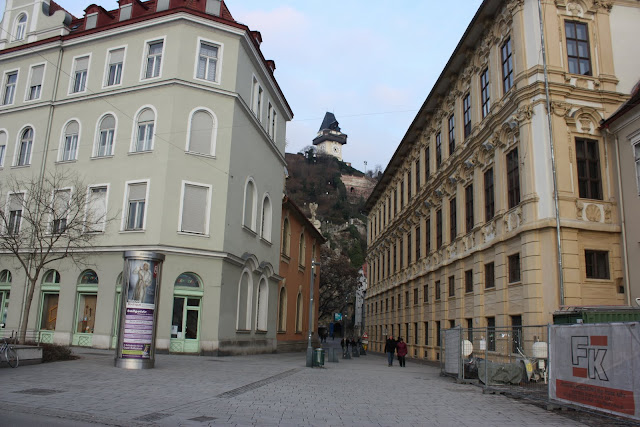 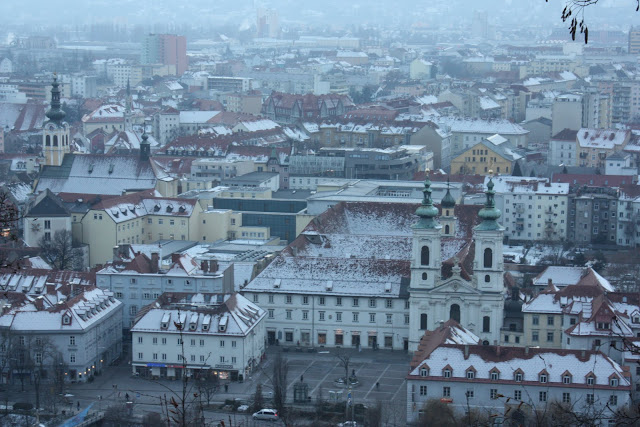 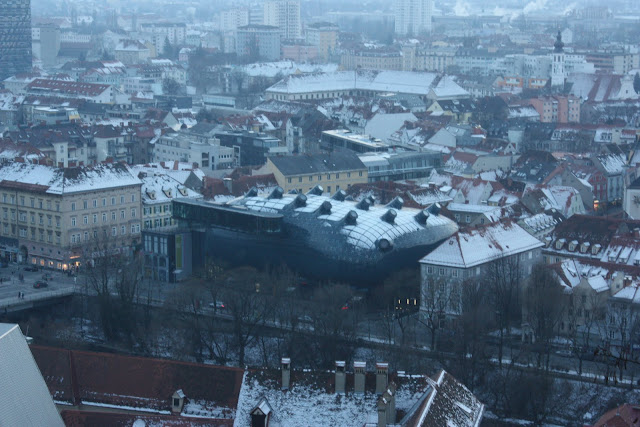 Kusthaus is a museum of the modern art. Unfortunately, main space of museum were closed the time we visited it.. and the stuff I saw didn’t impressed me much. We paid for tickets, entered the hall see several small rooms with devices pretended to be robots and after museum worker said: “That’s basically it, goodbye”. Not fair.

We’ve spend some time to find a place to eat.. Some restaurants were closed already that time, some was so luxury with man’s wearing smoking and lady’s in long evening dresses, that we could not conform to their companies :). I started to lose hope and recalling do we still have those crackers in hotel, but finally we found something. Austrian dishes differs from Italian ones. I liked Italian more, but anyway it was good and tasty.

So, next morning we were moving directly back to Ukraine, with one small stop at Budapest to get camera back :). We did a route fast and easy and soon was on Ukrainian customs. Faces of custom workers immediately return you to “Ukrainian Reality”. Fortunately they were to lazy to check our car, because we a little violate the law of amount of alcohol you allowed to bring in. After the customs you are completely back to earth with the roads you have to drive. Leaving Ukraine is easy stuff, but getting back is very depressing :). Roads are awful, full of wholes and without any road markings and lightings makes it really hard to drive. Situation is complicated with a big number of trucks moving from a border of Ukraine, with a low speed.. so you all the time have to practice in overtaking. In night, with limited far view it is difficult, scary and dangerous. First car crew was helping us a lot by moving forward and giving a directions and recommendations of safe overtaking.

I hardly could imagine how people from Europe will be driving to Ukraine to see Euro 2012.

In spite of everything we came to Lviv, one of the most beautiful places in Ukraine. Similar to Budapest, the center of Lviv is not very car-friendly. Small streets, block pavement, trams makes the problems. But now we are home, feeling that most problems are in past :). While we approached Lviv, we’ve booked appartments to live and table in one of the best places in Lviv called Kumpel’. They produce great beer (I like dark especially) and very nice dishes. After ~600km of road having a big glass of cold and tasty beer is great fun, believe me :). 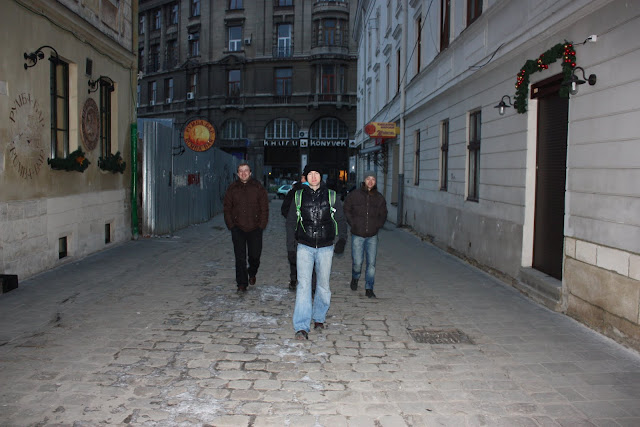 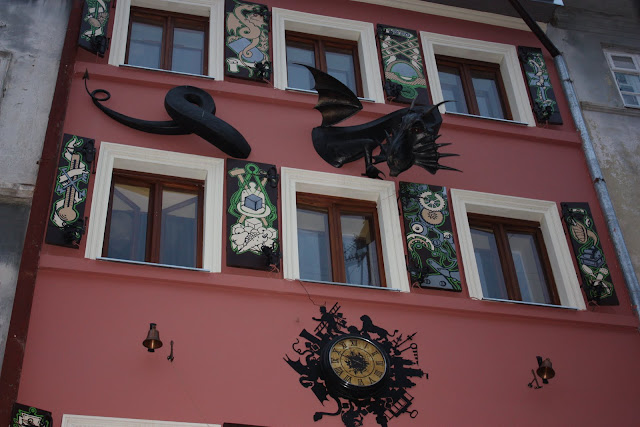 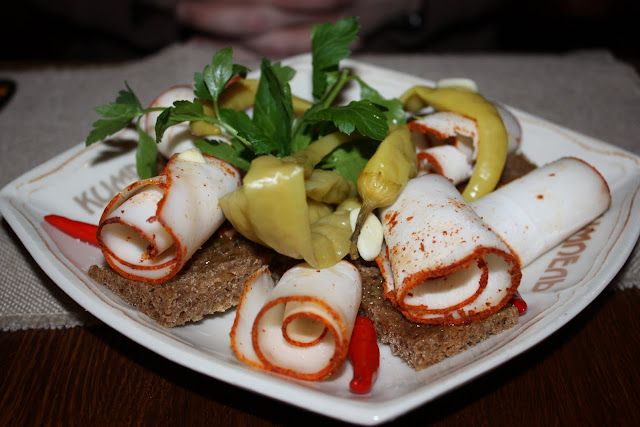 We got to Kiev, mostly with no serious at 15.00 next day. I was mostly sleep all day with a little driving before Kiev.

“East or west the home is best”, as saying goes.. We finally entered own city. Had a good bye by radio station with guys, saying “see you next year”, we landed near my house to unpack the bags and snowboards.

That was a great trip for sure! We did 3,908 kilometers in total. We had no injuries, no car damages. Visited greatest places and had snowboarding that I’ll be seeing in my night dreams in summer. You can find some more picture here. Now, it is time to work again.. to learn new things, to blog and self-improve. Thanks a lot if you read till this point :).