In short, it was one of the most exciting and interesting conferences I ever been (and participated) so far. My big respect goes to organizers: Sigma Ukraine, Akvelon and Ciklum as main sponsor.


In a little long, I’ve been invited to participate this conference by Anastasia Kladova, the PR manager of Sigma Ukraine during my visit of IT Jam 2011 this summer. It sounded so cool to me, since so famous guys as Ayende, Greg Young and Rinat Abdulin would be the speakers there as well. I had not other choice, just to agree.


Well, my trip to Kharkiv started not very good. Due to my personal awkwardness I simply missed the train. Now I have fun of that fact, by then I was standing on station and seeing my train passing away - it was not so fun to me. Anyway, with great advice of @chaliy by phone I switched to another train. The one one problem was - it comes to Kharkiv pretty late, at 10.00 o’clock.


Unfortunately I missed first keynote by Sander and first session of speeches. But I was ready for the rest of the day. I would not describe long my feelings to meet colleagues from other cities, which we communicate thought twitter. But it is exactly the conferences like that, where we have real opportunity to talk to each other. As for me, such communication is a bigger asset of any conference including NETWork. 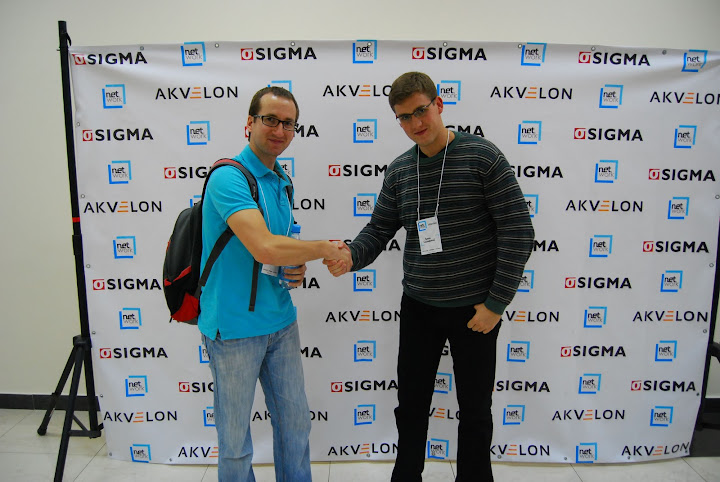 Let me share some feedback I got about the speeches I visited:


And after all speeches we had a kind of Round Table. All speaker got on stage and answering the questions of audience. It was a little funny to me how it went. First, the language - some questions were in English but answered in Russian, some was Russian but answered English :). I actually used English in respect towards our foreign guests, but anyway. The answers were long, not exact and mainly loosing the point of original question. I think the moderation (with a timing and topics) is really important here.


What I remembered the most is the question to Ayende - “How you became so productive?”, and the answer was something that great developer should answer “I’m not so productive, I just code a lot and do some blog posts”. Yeah, “Code a lot” - so simple rule to became from good to great. I’ll remember that.


Finally we had a great dinner at the one of Kharkiv’s restaurant’s. And I went to train station (0.5 hours ahead). There I met my guys from Kiev ALT.NET who had a great mood and bag full of beer. So, we’ve had nice Beer && Talk session till 3.00 AM on our way back home.